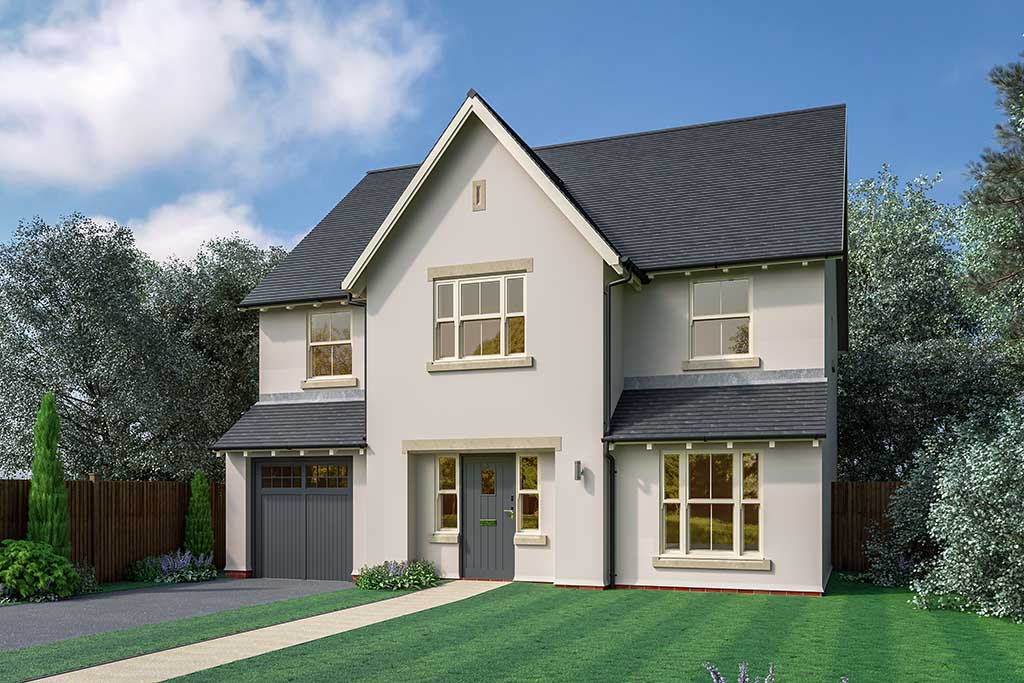 A STUNNING show home is set to open this autumn

to give homebuyers their first glimpse of the new life Edenstone Homes is breathing into the historic Wedgwood Park, in the Pen-Y-Pound area of Abergavenny.

The Ingleton, a majestic five-bedroom newly built family home with an integral garage, has been styled and decorated by interiors designers, Calico, who have taken inspiration from the idyllic parkland setting at Wedgwood Park.

Tonal greys, duck egg blues, accents of yellow ochres and earth greens combine to create a natural, organic look which allows the beauty of the home to speak for itself. Linen fabrics with woodland print contrast with on trend geometric prints, while rustic furniture pieces give a further nod to the natural environment which makes Wedgwood Park such a desirable address.

Andrea Nippe, sales director for Edenstone Homes, believes the show home will have appeal to buyers at various stages of life. She said: “We cannot wait to open the Ingleton show home. It’s been long awaited and we know that many interested buyers are waiting for the chance to step inside for a close up look at the quality of the build, the spacious layout and the high specification which comes a standard.

“Families with children will be impressed with the spacious layout, which includes a large kitchen/breakfast/family area spanning the entire rear of the home and a separate lounge for quiet relaxation. We’ve also styled a room as a study to inspire those who work from home

“We also believe downsizers in search of a statement address which offers so much to do right outside their door will find all they need here to Wedgwood Park.”

In the grounds of the historic 18th century home known as The Hill, Wedgwood Park, in the sought-after Pen-y-Pound area of Abergavenny, is close to the town centre and yet bordered by open countryside, on the fringe of the Brecon Beacons National Park.

The 20-acre development is defined into four phases including The Grange, an exclusive development of traditional four and five-bedroom family homes; The Manor House, five renovated apartments in the existing building; The Mews, new build homes and converted outbuildings including the gardener’s cottage, stables and coach house; and The Meadow, five family homes in a peaceful parkland setting.

Andrea Nippe adds: “Wedgwood Park will offer a relaxing and peaceful way of life to residents, with a heightened sense of luxury and convenience set behind a gated entrance and with three acres of lush green landscaping featuring mature trees, picnic area, woodland walks and a Victorian walled garden.

“Residents will be spoilt for choice when it comes to enjoying the great outdoors here. The extensive parkland, featuring Japanese Maples and an American Redwood create a striking backdrop. Home owners can also explore the beautiful woodland trails, enjoy a picnic or BBQ in the dedicated picnic area, provided exclusively for use by residents of Wedgwood Park.”

Wedgwood Park is named after horticulturalist John Wedgwood, who lived at The Hill in the 1830s.

To receive an invitation to the exclusive show home launch event at Wedgwood Park, call Edenstone Homes on 07387 262 347.